“No Dumping! No Trash! No Dumping – Balderdash!”

Every spring elementary students from Albany, CA can be heard practicing this line from a school play. The production, part of the third-grade history unit in several classrooms, outlines a story that has been passed down for decades in the city. The tale is about an early 1900s conflict between Berkeley and Albany—the former which began dumping garbage in the neighborhood of the latter. In real life, the struggle culminated when a group of Albany women turned away Berkeley’s garbage wagons at gunpoint, an event—which marked its 100th anniversary in 2008—that led up to the incorporation of Albany.

It turns out the story also has just as much to do with a feared plague epidemic and possible statewide quarantine.

The year was 1908. Berkeley had a serious problem—suddenly denied the use of its longtime garbage dump near the northwest edge of Alameda County, garbage began piling up within the city limits. At the same time, an increasing incidence of bubonic plague in the Bay Area had caused many cities, including Berkeley, to adopt strict sanitation ordinances to eliminate excess trash and exterminate rats.

Compared to the overall Bay Area population, the number of cases of plague was relatively small in 1908. However, health officials feared that without a vigorous regional anti-rat campaign, a widespread epidemic could occur. A plague epidemic was not only a threat to human health, it was also an economic threat. The plague could lead to a statewide quarantine, it was argued, and a significant loss of trade, with no market for California fruits, vegetables and other products. Quarantines had been experienced before in the Bay Area. In 1900, the first outbreak of plague in San Francisco caused Texas and at least two other states to declare a quarantine against California.

Meanwhile, the city of Berkeley had uncovered very few cases of plague in its initial investigations, and was reticent to spend significant amounts of money on an anti-rat and sanitation campaign. But health officials pressed, and Berkeley finally complied. Now, after plague concerns closed its longtime garbage dump, the city entered a period the newspapers dubbed the “Garbage Wars,” when Berkeley searched in vain for a new place to dispose of its refuse.

The city first explored a number of other dumping areas and alternatives before coming to Albany, which was then an unincorporated area known as Ocean View. Berkeley officials investigated several potential sites in West Berkeley, and dumping tentatively began in the area, but West Berkeley residents were indignant, vocal and highly organized against the effort. The Southern Pacific Railroad was approached to haul the garbage to marshes outside of the county, but residents of Suisun and adjoining towns issued harsh warnings in protest. The city also considered hauling its garbage away on barges and dumping it in the sea, but this was an expensive alternative. Concurrent to all these efforts was an investigation into building a garbage incinerator, but this would take considerably more time, and was also expensive and controversial.

Finally, Berkeley secured the use of some land along the waterfront in Ocean View. It arranged to lease the property from the San Francisco Chemical Co. for a costly $250 a month, and began dumping the many loads of trash that had been piling up in Berkeley. The unhappy residents of Ocean View (a rural area of just 200-300 people) immediately organized to stop the trash deliveries from Berkeley. They went to the District Attorney, who issued a formal warning to Berkeley that its garbage collectors (at this time called “scavengers”) could be arrested if the city’s dumping created a nuisance. Berkeley and its scavengers were undeterred, believing Ocean View could not prove the dumping was a nuisance.

Frustrated with this response, a group of Ocean View residents (mostly women) decided to take matters into their own hands. Armed with shotguns and other firearms, they gathered on the morning of April 1, 1908, on Buchanan Street near the San Pablo Avenue intersection, and boldly stepped in front of Berkeley’s approaching garbage wagons, turning them away. The plan worked well for a few hours, until a carload of Berkeley Chamber of Commerce officials met the group during a trip to inspect the new dump. The Chamber officials contacted the police, and the county sheriff soon arrived, threatening to throw the Ocean View residents in jail if they continued to bear arms.

The event resulted in many colorful newspaper headlines throughout the Bay Area: “Women with Guns Hold up Men – Sheriff to Rescue”, “Angry Mob Holds Up Scavengers with Guns”, “Women with Guns Renew Garbage War.” Some particularly lively articles exaggerated the event by claiming a woman threw herself and her baby in front of the oncoming Chamber auto –coverage that was later criticized by those involved.

Ocean View residents then searched, once again, for a legal way to stop the dumping. They attempted to secure an injunction against Berkeley, for example, with mixed results. Finally, in September of 1908, they decided to incorporate as the City of Ocean View and solved the garbage problem once and for all by adopting an ordinance against outside trash dumping.

After a time, the plague scare subsided in the Bay Area and Berkeley found other solutions for its refuse, including the eventual use of a garbage incinerator. Ocean View changed its name to Albany, and like many post-earthquake East Bay cities, soon began to expand.

It’s doubtful that the residents of 1908 Ocean View ever dreamed that more than 100 years later their struggle would be immortalized through a third-grade play—but as the girls and boys of Albany take to the stage again this spring, the story will be remembered once again.

by Karen Sorensen (storiesfromalbany@gmail.com) is an Albany-based writer, local historian, and fifth-generation Californian. She has authored numerous articles about Albany history and wrote “Images of America, Albany” (2007) (a joint effort with the Albany Historical Society) and “Albany – Stories from the Village by the Bay” (2020). 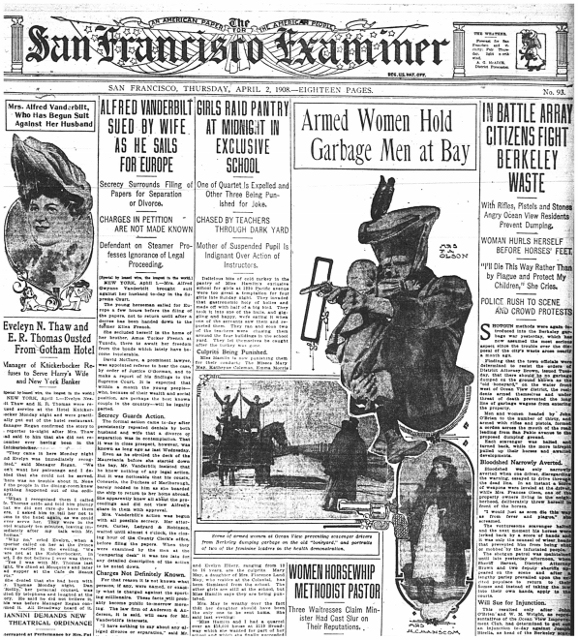